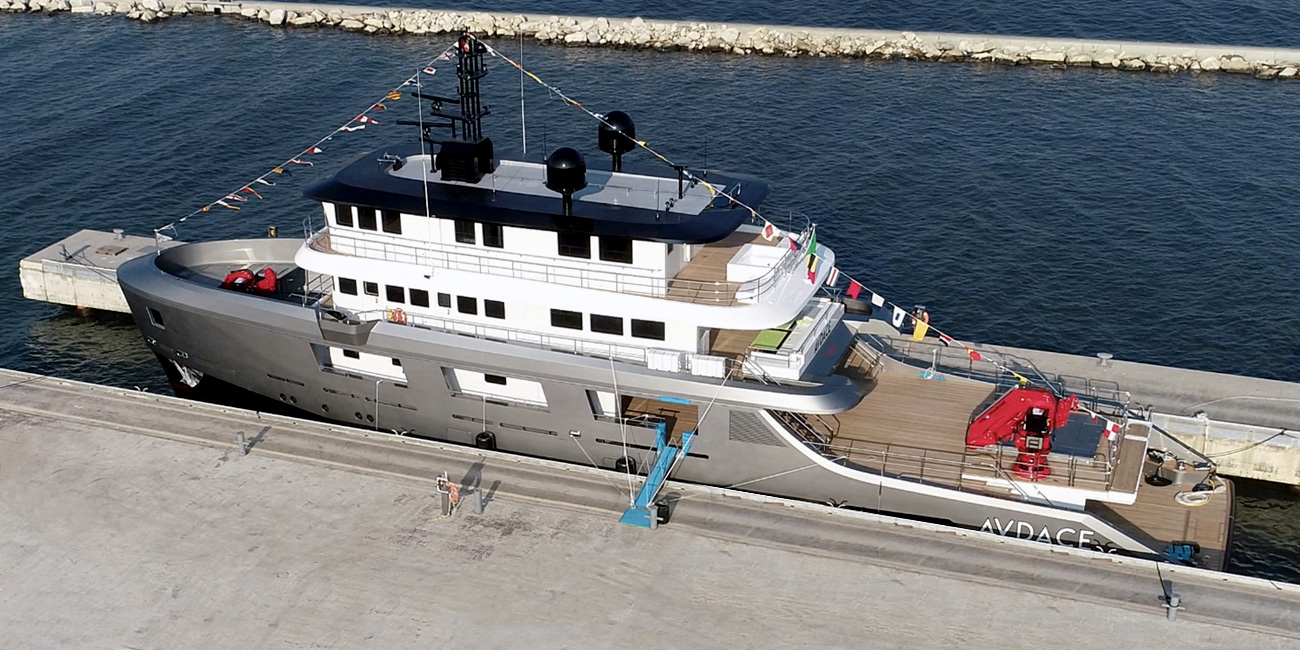 2019 has just started and activity at CdM is in full swing.
On January 14th, K42 Audace successfully touched the water.

K42 Audace is a surprising yacht which rocks the standards we are used to. We might define she an extra-ordinary yacht, a yacht whose shape and features are surely out of the ordinary.
Audace fulfills her Owner's long-held project to commission a pure custom explorer yacht. Her Italian Owner will leave on board all year round hence the need to create environments and amenities that perfectly fit his lifestyle.
The project stems from a fruitful collaboration of all parts involved in its development and all players are as expert, innovative and respected as might be expected of such a complex project.
For CdM K42 Audace is a first. It is indeed the first pure custom explorer vessel the Ancona-based shipyard has ever built and, when it was commissioned, it represented for CdM the first step into a new segment of the market. The project brings the signature of Andrea Pezzini/Floating Life who developed the K series in conjunction with Mauro Sculli entrusted for the naval architecture. The project has been engineered by Sergio Cutolo/Hydro Tec. Project Manager for the yard is young and skilled Domenico Ranieri who worked in close collaboration with Andrea Pezzini/Floating Life who acted also as Owner Representative.
Ennio Cecchini, co-founder and CEO at CdM, says: “Audace provides very good evidence of CdM's technical and organizational capabilities. Affording a one-off project was a challenge we were ready to face. Many more brand new projects are in the pipeline. CdM's team brought its wealth of experience to bring this complex project to completion as scheduled.”

K42 Audace in short:
the yacht has a LOA of 42.80m and a large beam of 9.40m. At full load she has a draught of 2.75m. Displacement at full load is 450t. Gross Tonnage 490GT. With twin Caterpillar C32 Acert SWAC EPA T3 and 62,000 litres of fuel, Audace has a range of 5,400nm at 10 knots.
Spread on five deck, a large tank deck included, Audace has 4 guest cabins, two on the Lower deck with balconies, and two on the Main deck with direct access to the side passages. Nine berths for crew. The Owner apartment is on the highest level, above the Upper Deck.
A professional galley allows two chefs to prepare meals for up to 250 guests. A Land Rover Defender, a BMW motorbyke, water-ski, and a crew tender are stored on the forward deck while a large tender, hauled with a 9t crane, is on the Main deck aft. Two discoteques, one on the Lower deck and one on the Main deck, are fully equipped for dancing all night long.