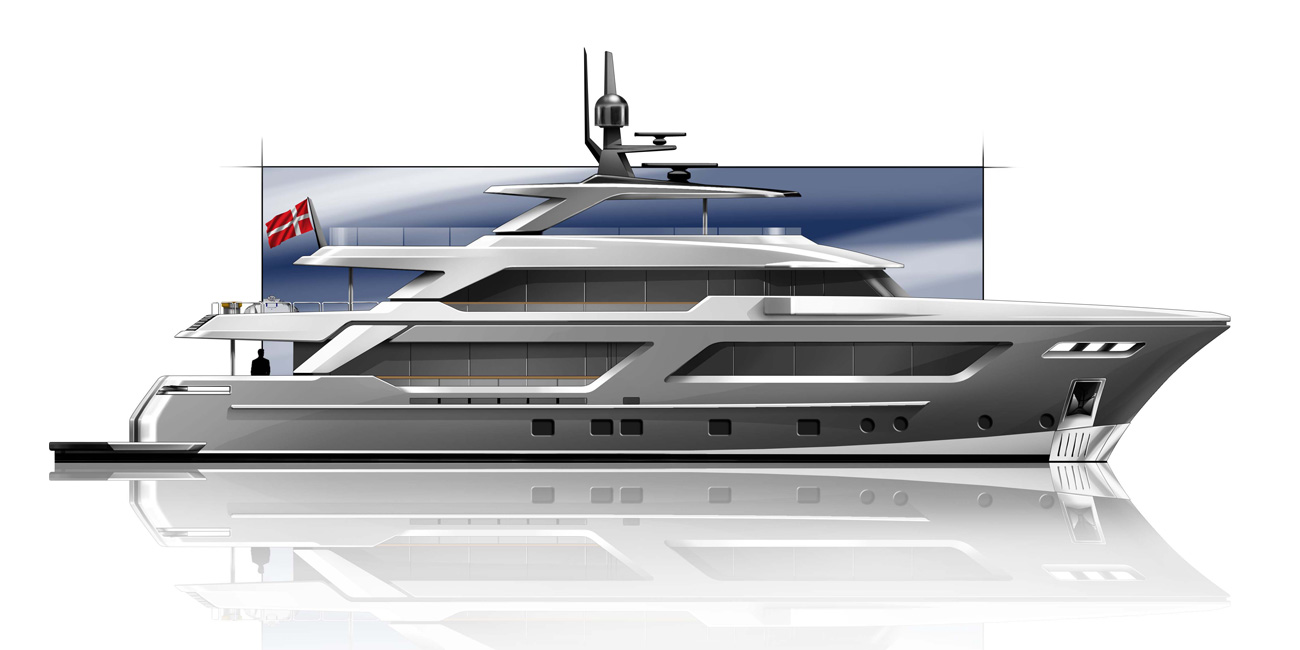 2018 represents a turning point for CdM in regard to expansion and evolution with Project MG 129 breaking new ground in the approach to yacht design. Where it may seem impossible to come up with a new idea for Explorer yachts, with few design innovations left to discover, CdM introduces a new concept designed to take centre stage - an Explorer yacht fashioned to provide extreme seaworthiness combined with top-end elegance.

After having briefly presented the concept of a new generation of yachts named FLEXplorer for their flexibility in both use and configuration, whose first unit M/Y Aurelia 29 has been recently sold, CdM sets a new benchmark in the Explorer yachts segment always proving to be one step ahead for its vision and comprehension of the yachting market.

Project MG 129, a 40-metre steel and aluminium displacement yacht, featuring exterior and interior design by Francesco Paszkowski and naval architecture by Hydro Tec, is the latest addition in a small fleet of yachts belonging to the same experienced owner who has precise ideas about how his new yacht should look. This is one of the many yachts sold by CdM to North European owners and on this occasion the buyer being represented by the Camper & Nicholsons New Build Division in conjunction with broker Richard Higgins who has advised the owner at pre-contractual stage. Camper & Nicholsons Project Management Division have also been appointed for the management of the build.

“It is a great pleasure to work with an owner who was keen to bring his experience to CdM,” says Vasco Buonpensiere, co-founder and Sales and Marketing Director at Cantiere delle Marche. “By deciding to have his new yacht built by CdM he offered a serious statement of trust in our yard's reliability and construction quality.”

“I would like to add that it is inspiring and a reason of pride to see how a growing number of experienced and motivated owners chose CdM to build their yachts,” Buonpensiere maintains. “Our clients have fantastic ideas for cruising, diving, luxury toys and serious boating. They are planning adventures, getting involved in underwater exploration, marine life observation, etc. As a shipbuilder, it is exciting to be a part of making their ideas a reality.”

Fabio Ermetto, Chief Commercial Officer of Camper & Nicholsons says: “It has been a great experience to represent an experienced yacht owner with a clear vision of his next yacht and at the same time having the CdM team with a very professional and client oriented approach, always able to translate such a vision.”

Project MG 129 is a luxury yacht featuring a great wealth of exterior spaces with a real go-anywhere, do-anything expedition pedigree. Her elegantly austere silhouette brings the unmistakable signature of Francesco Paszkowski who, alongside her noteworthy geometry, introduced countless well-conceived features in terms of logistics, livability and functionality. “The owner’s wishes have been successfully combined with CdM’s experience and our team,” says Florentine designer Francesco Paszkowski. “The naval architecture and our design went hand in hand, resulting in a perfect marriage of function and form.”

“We are very glad to start a collaboration with Francesco Paszkowski based on mutual respect” says Buonpensiere. “Moreover, Francesco has long since earned the trust of MG 129's owner by designing for him no less than four yachts in the last few years.”

As is the case of Aurelia 29, the tender will not be stored in a garage but on the Upper deck astern and is launched and hauled by a crane concealed into the yacht's structure. Once the tender is deployed the deck's vast flooring is available for lounging, dining or sunbathing. Many studies now emphasize that tenders are kept in the water for around 93% of time when the owner is aboard therefore it is much more useful to have a stern garage for storing water toys, diving gear and much more besides.

As all yachts built by CdM, Project MG 129 will be over engineered with equipment redundancy and feature a sturdy and reliable hull to allow her Owner to sail the seven seas in full safety.